Below is an email that was received from Sarah O’Leary, who is a long time lawyer and representative for both workers and unions. I asked her if we could publish the email which succinctly sums up the state of affairs that we are facing in an even broader picture today. That the employers think that they are the only ones capable of making good decisions, and if you don’t do what they want you to, it will all end in disaster…its bull**it.

Hi Folks:  You’ve probably heard that the Employer’s Forum has been kicking up a fuss about the government’s WCB review, conducted by Janet Patterson.  They have said that they are pulling out of the process.

The Employer’s Forum has announced that Janet can’t provide an impartial review because in 2009 she did a paper, together with Stan Guenther, and me, for the BC Fed.  This paper, Insult to Injury, assessed the impact on workers of the Liberals’ changes to the Workers’ Compensation Act in 2002/03.

Now for those of you who may not be as long in the tooth as some of us, let me give you a brief history.

The “Employer’s Coordinating Group,” a large group of activist employers (and many of the same people involved in the pull-out yesterday), retained Alan Winter from Harris and Company, a big downtown employer-side law firm, to present their submission to the commission.

Mr. Winter was very well-placed, then, to provide his recommendations to the Liberal government when they took power in 2001.  Having provided the employers’ perspective on Workers’ Compensation reform to the Royal Commission, the Liberals thought he would be the perfect man to recommend a new Workers’ Compensation Act for them. The Winter Report was presented in March 2002 and subsequently mostly passed into law in 2002/03 with Bills 49 and 63.

My point is this: the employer groups doth protest too much.  They got their leading employer-side lawyer to rewrite the Workers’ Compensation Act in 2002; that is the system we have in place today.  They had no qualms about whether it was a fair process for workers.

But ask a lawyer who is NOT employer-side, and they yell and scream bloody murder.

I have never understood why more employers do not have as their primary interest, the health and well-being of their employees. There are some that do.  But many of the big employers have been so used to having complete control, as they did during the Liberal tenure, that they are not prepared to even engage with a process of review if there is an appearance of concern for workers’ welfare.  It’s “my way or the highway” as far as these employer groups are concerned.

Shame on them!  The protection and welfare of workers should be a shared concern to all in the realm of Workers’ Compensation. The fact that they aren’t willing to even engage in a fair and impartial review reflects exactly where they stand.  They aren’t interested in any revision of the WCB unless it is dictated entirely by their interests. Disgraceful.

There will be a Forklift Certification course scheduled to be held October 23rd at the Boilermaker Training Centre Members will receive Forklift Operator Certification.

A combination Aerial boom and Scissor Lift course is scheduled to be held October 24th. Members will receive certification on both Scissor Lift and Aerial Boom Lift.

As part of the Tripartite conference Joe Kiwior was awarded the Industry award of Excellence. The Trustees took the opportunity to acknowledge Joe for his commitment, dedication and support of apprenticeship training.  Chris Kiwior was there to except the award on behalf of Joe. Below Chris is pictured with Dustin and members of the National Training Trust Fund (NTTF). 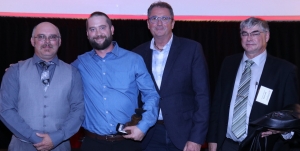 The 2019 Boilermaker Annual Apprentice Awards Banquet and Tripartite Conference was held this year in New Brunswick Aug. 12th through Aug. 16th. The 2019 top student that attended the tripartite conference and Apprentice Banquet was Dustin Cable. Dustin represented 359 as the top apprentice for 2019. 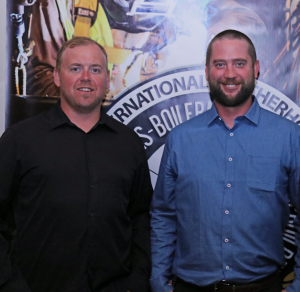 BM&M: We are currently working with BM&M on establishing an Attendance Policy for the shop. There has been good communication between the union and the employer and we hope to have the policy agreed to and in place very soon.

IST Boiler: Is currently looking for B Pressure (or higher) Welder to start ASAP for approximately 3-4 weeks. The shop is located at 6425 River Rd in Delta and there will be an onsite weld test for the shop procedure.  If you are interested in the position, please call Glen Martel @ 604-952-1344.

Peerless: Unfortunately due to the decline in the lumber industry, Peerless had to lay off a significant portion of its members recently. It is important for those members who were laid off, that wish to stay on the shop recall list, that they maintain their dues in order to remain in good standing.

Peerless is holding a Poker Bike Run on September 14th. The route will include stops in Keremeos, Osoyoos and Penticton. Members who wish to participate must bring $20 to enter and meet at Peerless prior to 11 am. For further information regarding the bike run, contact Marty Robertson @ 250-859-2796.

Inter Kraft and Valmont: Current collective agreements for both shops expire at the end of December. Bargaining for these agreements will commence in the coming months. Requests for proposals from the members at the respective shops will be sent out prior to bargaining.

In July 2018, British Columbia’s government signed an agreement called the Community Benefits Agreement (CBA) with a group called the Allied Infrastructure and Related Construction Council (AIRCC), which represents many of BC’s building trade unions and their members.

The agreement provides the Building Trade Unions with all provincially funded infrastructure work for the foreseeable future (under the Provincial NDP Government). A newly formed Crown Corporation called BC Benefits Infrastructure Inc. (BCIB), will act as the “signatory and employer entity” under the Community Benefits Agreement (CBA). AIRCC’s mandate is to provide the labour workforce for the construction of selected public sector infrastructure, delivered in accordance with the terms and conditions of the Community Benefits Agreement. The BCIB will act as a hiring hall for all workers involved in provincially-funded projects undertaken through the CBA.

This agreement requires any Contractor and their workers who are not affiliated with the building trades unions who wish to qualify for work, will have to accept BTU workers provided through BCIB. Infrastructure projects that are subject to the CBA will require employees on those projects to join specified trade unions.

The new NDP government claims that the CBA is intended to increase the use of apprentices, address existing and future skill deficiencies, to achieve a wage alignment with prevailing industry rates for all employees. To encourage priority hiring of individuals living in proximity to projects being built or developed with government funding and to increase hiring and training of Indigenous persons and women and youth around the province in construction and related allied trades.

The first infrastructure projects that will be subject to the CBA are the Pattullo Bridge Replacement Project and the Trans-Canada Highway 1 Kamloops to Alberta Border Four‐Laning Project. The CBA will apply to other projects, as agreed to between the Government of B.C. and the Allied Infrastructure and Related Construction Council of British Columbia (AIRCC).

To view the Community benefits Agreement between BC Infrastructure Benefits Inc. and Allied Infrastructure and Related Construction Council of British Columbia, click on the following link:

Site C Turbine and Generator currently has 15 Boilermakers on site between 2 shifts.  They will continue building the scroll case pieces in the shop they have set up on site.  No definitive date have been given as to when the installation of the scroll case will begin.

Site C Penstock currently has 51 Boilermakers on site between 2 shifts.  We are seeing small bump up orders coming in for this job.  The peak manpower number is not known at this time.  As the work scope increases they will continue hiring Boilermakers to meet those needs.

The Horton job in Prince Rupert currently has 59 Boilermakers on site.  The construction of the three spheres should take another 6 – 7 months approximately.  We would like to thank those members and travel cards that are working hard and doing quality work representing the Boilermakers.

In regards to Shutdown work we should start seeing orders coming in late August early September and go through until early November.  Kamloops, Prince George, Castlegar, Port Mellon, Crofton, Covanta and Port Albernie are all set to have shutdowns this fall.  We do not have exact dates or manpower numbers as of yet.  The contractors are still working out the finer details with clients in regards to these issues.

Melloy has recently started bidding jobs in our province and will be going into Parkland, formerly Chevron.  They have a small crew of 2 right now for prep and will be increasing their numbers slowly.  The shutdown is scheduled for late January early February and should last 4 – 6 weeks.  This will be one of the biggest shutdowns that Parkland has ever had.