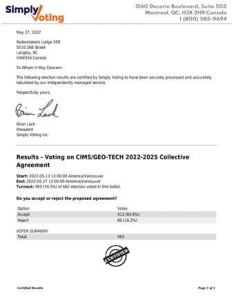 Regarding the ratification vote held May 13th to May 27th. We are pleased to announce that the Tentative Agreement between Lodge 359 and the CLR Non-BCBCBTU (CIMS-Geo-Tech) has been accepted. A summary of results are as follows:

The amendments and the new wage package will take effect for this agreement beginning Sunday May 29th.

We can also announce that the Lodge 359 bargaining committee met with the BC BCA this week, and they have agreed to make substantially the same amendments to the BC BCA agreement, including the same wage increases. The Union has agreed that since the ratification for the above CLR-Cims/GeoTech agreement has now been accepted by a clear majority, we will accept the BC BCA agreement also.

In addition to the above agreements now being completed, we’d like to announce that after liaising with the CLRA, the BC BCA, and TVE Industrial Services, TVE Industrial Services has chosen to shift their signatory agreement with Boilermakers Lodge 359 from the CLRA Standard Boilermaker Agreement to the BC BCA Boilermaker Agreement and join the BC BCA contractor group. The Union has given consent to allow this change in agreements, and we are now in discussions on a transition period for this to take place. We expect that TVE’s transition to the BC BCA will be done in short order, and further details on the timing of the change will be announced as soon as we have the transition details finalized. The Union and its membership will do all we can to support TVE Industrial Services in this major change, and we are excited to have them join the BC BCA Contractors group.

Online Voting is now under way for the ratification of the new tentative Collective Agreement between Boilermakers Lodge 359 and CLR (non-BCBCBTU). CIMS Ltd and Geo-Tech are the signatory contractors, and the agreement is based upon the last BCA agreement, and not on the “CLR Standard Agreement”.

More than five years had passed since a 1917 “Farquhar” steam traction engine at the Industrial Heritage Centre in Port Alberni on Vancouver Island made its last run.