Boilermakers and artists have quite a bit in common says Hilary Peach, a Lodge 359 (Vancouver, British Columbia) member who wields a welding torch as well as a pen. She finds that many artists acquire day jobs in the trades. As an artist who is skilled in several mediums, and as a Boilermaker, she understands why.

“Boilermakers are welders and mechanics, fabricators and riggers,” Peach says, noting that likewise, interdisciplinary artists master a variety of different art forms. That’s something that drew her to the union.

Peach discovered the Boilermakers after she finished her undergraduate degree in theater and literature at the University of British Columbia. That’s when she realized she needed a parallel career.

“If you have an art practice, you learn pretty fast that you’d better get another job to make a living,” Peach says.

In addition to traveling out of Local 359 doing pressure welding and other jobs in confined spaces, Peach is a sculptor, poet, filmmaker and writer — her debut poetry book “Bolt” came out in July. She’s also a spoken word performance artist who has graced stages all over the globe. 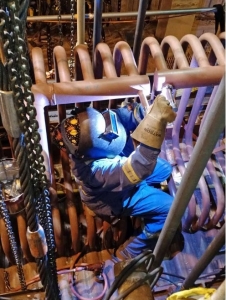 If that’s not enough, Peach has her own blacksmith shop on Gabriola Island in British Columbia, where she lives. In her 12-by-12 shop, she teaches beginning classes in blacksmithing, introducing seven different techniques during a three-hour session. She also uses the shop to complete small repair jobs for the island’s locals. And, she founded the Poetry Gabriola Society in 2000 and launched the Poetry Gabriola Festival — the island’s yearly arts festival.

Combining her craft and her creative mind, Peach has used her work as a Boilermaker to influence her art. In the early 2000s, she worked for five months across the U.S. on a travel card. She describes her time in the states as “interesting, challenging and eye-opening.”

“There’s something about traveling a long way from your comfort zone alone as a young woman,” Peach says. “There were a lot of narratives — stories attached to those different adventures.”

That five-month journey turned into a spoken recording titled “Suitcase Local,” performed with a live band. The recording features four pieces that were named after the different states where she worked. Eventually, she took “Suitcase Local” on tour as a live show.

Listen to Hilary Peach’s recordings of her performance art and discover her writings at www.hilarypeach.ca.

Peach fits her interdisciplinary art practice around her work as a Boilermaker. After 20 years in the field, she believes her two professions pair well.

“Someone gave me some good advice once: Follow your curiosity. It will lead you to unpredictable places. It might be a short story, a song, directing a film . . . you don’t always have to know,” Peach says. “Boilermakers have that. We’re all about problem solving. When I started in the union, I had a sense that ‘I can’t do this. I don’t know what to do about this.’ I now believe in my bones that I can fix anything. I can figure it out. Artists do that, too.”

This is one of many poems found in her new book, “Bolt,” published by Anvil Press, available now at www.anvilpress.com. 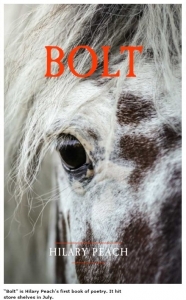 that was a long time ago

tonight
they are skittish
and on the move
making a break for it
they angle swaybacked
down the main road
swinging their great horns
from side to side
their breath
cool as smoke
the scent of something
tenderly uncertain
on the air.